The design principle of the Fresnel lens is that the lens is no longer regarded as a whole during processing, but as an entity composed of many microstructures. These microstructures retain the curvature radius of the original convex lens, and remove the intermediate light The deflection does not work or affects a small part. The design process of the Fresnel lens is shown in Figure 1, and Figure 2 is a physical diagram of a flat Fresnel lens. In the early days, due to material limitations, lenses were all made of glass, and Fresnel lenses were no exception. However, if the traditional grinding and polishing method is used to process Fresnel lenses, it not only takes a long time, but also consumes manpower, which leads to cost Too high. Later people invented... 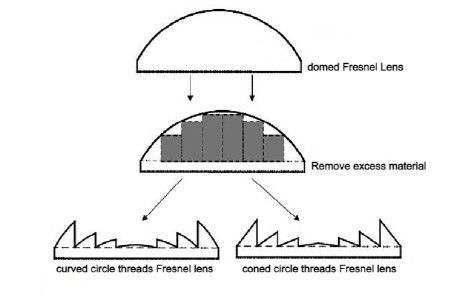 The Design Principle of The Fresnel

is no longer regard the lens as a whole during processing. Rather, it is regarded as an entity composed of many microstructures. These microstructures retain the radius of curvature of the original convex lens, while removing the part that has no effect or little influence on light deflection. The design process of Fresnel lens is shown in Fig. 1 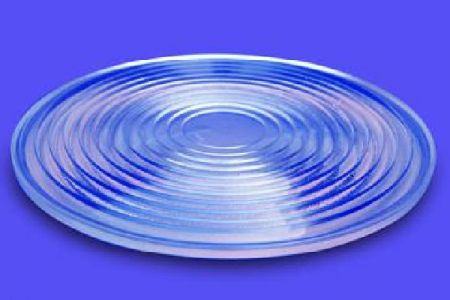 In the early days, due to material limitations, lenses were all made of glass, and Fresnel lenses were no exception. However, if the traditional grinding and polishing method is used to process Fresnel lenses, it not only takes a long time, but also consumes manpower, which leads to cost Too high. Later, people invented the metal mold hot pressing processing method, but the surface stress of the glass was too large, which caused some details to be unable to be pressed during the hot pressing, so that the Fresnel lens could not achieve the expected use effect. These reasons made the early Fresnel lenses cannot be promoted. 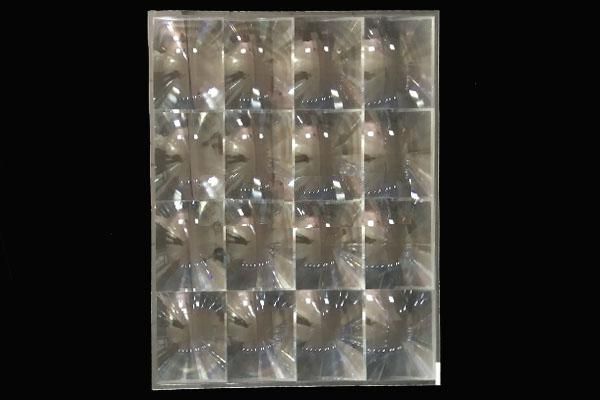 Starting around 1950, a new material, polymethyl methacrylate (PMMA), has been widely used in lens production because of its optical characteristics very similar to glass and the advantages of lighter weight. on. In 1951, Miller and others used PMMA to successfully produce Fresnel lenses. Because PMMA is low in cost and stable in nature, people began to use it to replace glass to make Fresnel lenses since then.
With the advancement of science and technology, the lens processing technology continues to improve, and the optical performance of the Fresnel lens is getting better and better, and it is gradually being valued by many fields. Because the Fresnel lens has thin thickness, low quality, low cost, and good condensing effect And other advantages, many fields have begun to pay attention to the application of Fresnel lens. Among them, the solar concentrating photovoltaic industry has put Fresnel lens into use. With the development of science and technology, scientific and technical personnel are still making Further research and experiments have also achieved many gratifying results.

Since 1970, the National Aeronautics and Space Administration began to conduct detailed research on Fresnel lenses, and the many research results obtained have served as guideposts for future scientists on the path of Fresnel lens research. In 1979, Kritchman developed a high-power condensing curved line focusing Fresnel lens. The biggest advantage of this lens is a qualitative leap in concentrating performance. In 2006, Korean Kwang sun Ryu proposed a design method of dividing the surface of the Fresnel lens into small modules. This method uses software to process the small modules of the Fresnel lens so that the incident sunlight can evenly illuminate the silicon photocell The above solves the problem that the solar light is easy to concentrate in a small area and burn the battery in the past. 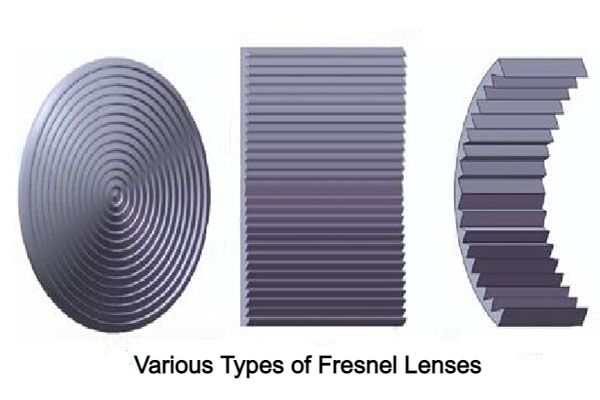 In 2002, in the study of cylindrical line focusing Fresnel lens, it was found that when the F number is around 1.3 and the concentration ratio is 5 or 6, the optical efficiency can reach more than 85%.

In 2007, a Fresnel lens that abandoned the traditional concentric ring structure and adopted Archimedes spiral grooves was designed. Although this lens has no essential difference in application from the concentric Fresnel lens, it is Fresnel lens created a new structural form.

In 2009, it was discovered through research that the focusing efficiency of the Fresnel lens is directly proportional to the intensity of the incident light. At the same time, due to the certain light reflection on the surface of the Fresnel lens, its light transmittance is inversely proportional to the angle of the incident light. 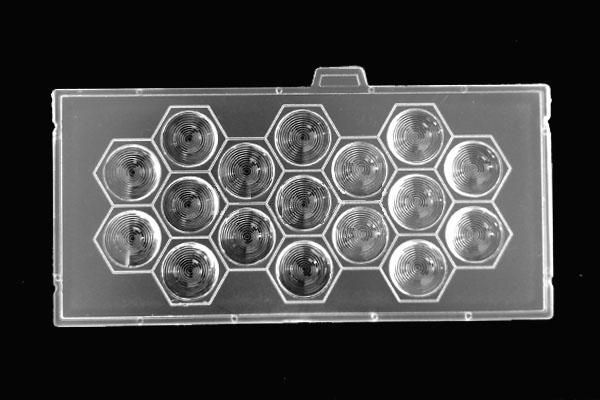 In 2011, the performance of the Fresnel lens was studied indoors and outdoors. The results showed that the error of the light transmittance was unchanged in the indoor and outdoor test, but the test error of the concentration efficiency was lower than the outdoor test in the indoor test, and analyzed The reason for this difference will provide a reference for people in the testing and processing of Fresnel lenses in the future.